Piedras Blancas is located on California's central coast along Highway One just six miles north of San Simeon. The point is named for the white rocks located just off the end of the point. In the early 1870's, this location was chosen to fill the gap between the lighthouses at Point Conception and Point Pinos.

The Piedras Blancas Lighthouse was completed in 1875. A two story Victorian style dwelling was completed later that year. The original tower was 115 feet tall and it housed a first-order Fresnel lens. During an earthquake the weight of the heavy first-order lens caused damage to the top of the lighthouse and the lens had to be removed. A fog signal building and additional keeper's dwelling were added in 1906.

Piedras Blancas lighthouse was operated by employees of the US Lighthouse Service until 1939 when the Coast Guard assumed command. Technology eventually replaced many of the functions of the lighthouses as they became automated. The Coast Guard subsequently relinquished control and management of the Piedras Blancas Light Station to The Bureau of Land Management on October 12, 2001.

Piedras Blancas Light Station Tours
Date and Time: From September 1-June 14 tours are offered Tuesdays, Thursdays, and Saturdays. From June 15-August 31 tours are offered Mondays-Saturdays. There are no tours on Federal holidays. A reservation is not required for groups of less than 10 people. Groups of 10 or more please make arrangements at 805-927-7361 or email PiedrasBlancasTours@gmail.com. Tours may be cancelled on the day of the tour due to inclement weather.

Gathering Location: Tours originate at the former Piedras Blancas Motel, located 1.5 miles NORTH of the light station, on the west side of the highway. You will be met by an escort at 9:45.

Tour Regulations:
- Stay with your group and walk only in the designated areas.
- No pets!
- Small children may need to be carried. The trail can accommodate both strollers and wheelchairs.
- There is no beach access at the Piedras Blancas Light Station.
- Smoking is prohibited.
- Please turn off cell phones during tours.
- No collecting of any kind is permitted.
- All plants and wildlife are protected.

General Information:
- The weather can change quickly. Dress in layers and wear comfortable walking shoes.
- Accessibility: Please inform us of special needs. Wheelchairs are available.
- Portable toilets are available along the tour route.
- Photography for personal use is encouraged; for publication requires a permit.
- For more information call 805-927-7361 or email PiedrasBlancasTours@gmail.com

The signature characteristic of the Piedras Blancas Light Station varied over the years.

This is what you see as you are traveling south down Hwy 1
As you can see it appears the lighthouse ends sharply at the top
That is because the lense has been removed and an automated beacon
put in its place. That is the nub you see in the center on top. 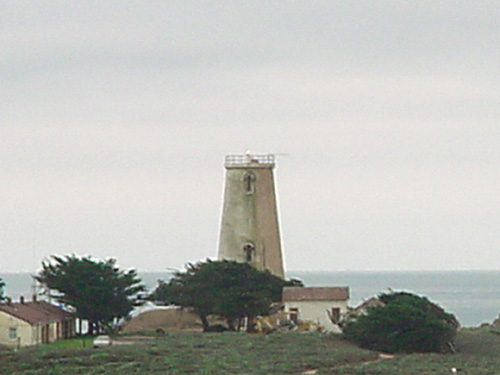 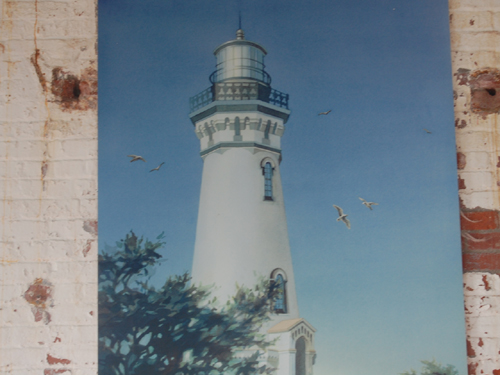 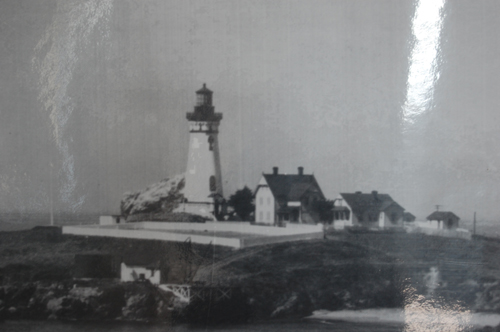 Walking along the nature trail at Piedras Blancas is a rock along the coast
Back when there were lightkeepers at the station the children named it Bear Rock
The rock looks like a bear sitting on the coastline looking at the ocean. 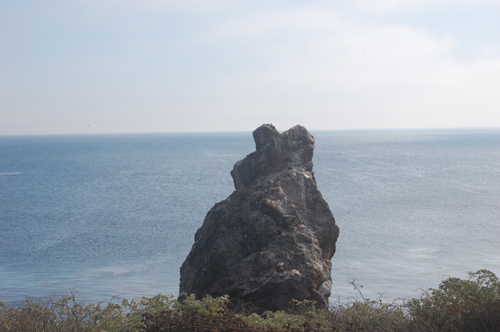 Taking a look at the lighthouse over the top of some of the buildings
while walking along the nature traill. 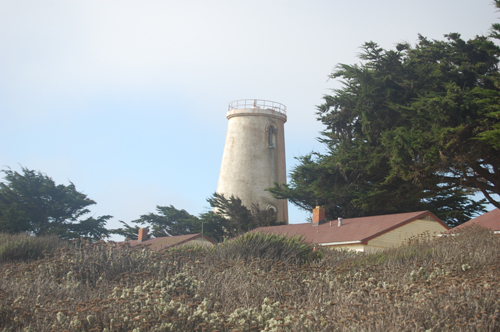 Looking at the lighthouse from the back side of Piedras Blancas
from the nature trail. 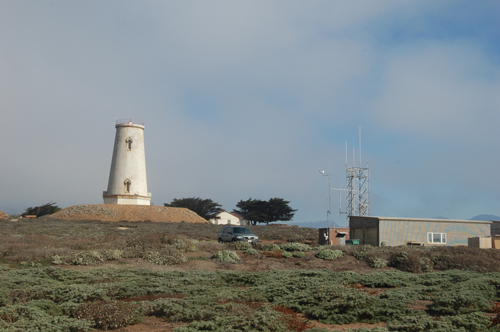 Here you see on the left side of the picture the old fog-signal building.
Next center way is the oil storage building, in this room was stored oil for the
lamp in the lighthouse; after filling a container they would make the long walk
to the lighthouse and up the stairs to the top to refill the lantern to keep the light burning.
Then of course you see the lighthouse at the Piedras Blancas Light Station. 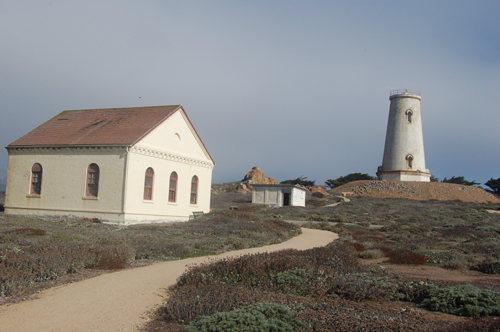 Another look a the lighthouse from behind some of the newer buildings. 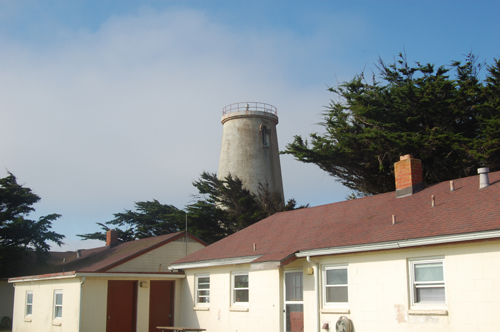 Looking from the front of the lighthouse with the flags blowing in the breeze. 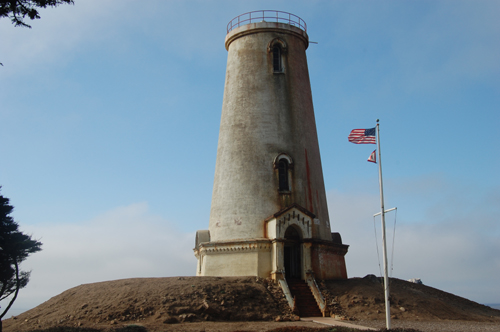 Getting ready for a tour inside the lighthouse. 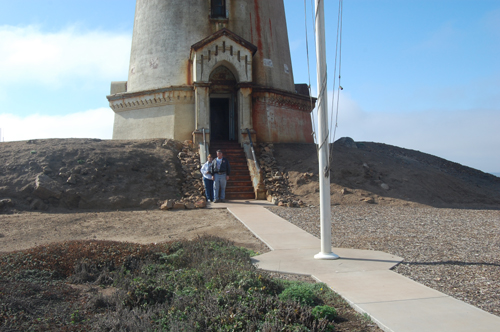 Taking a look through the doorway into the lighthouse. 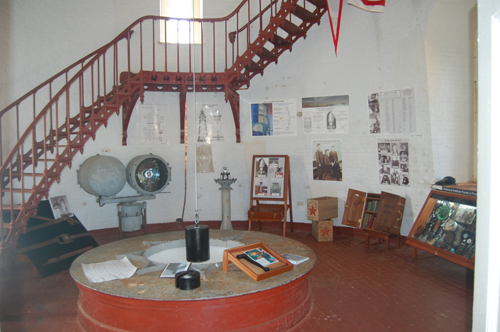 Taking a look up the stairwell from down below. 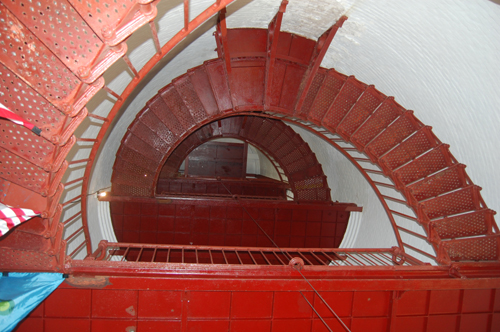 Looking down from the first platform while climbing the stairwell you see the large counter weight
this counter weight had to be wound up every hour and a half to turn the huge lens in the lighthouse
as the lens turns the counter weight would lower into the big hole you can see. 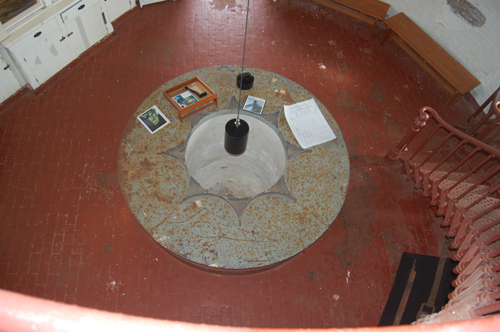 This is at the top floor of the lighthouse looking up a ladder at the crawl hole onto the roof. 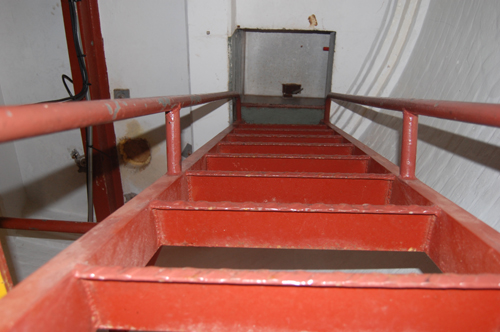 My sister stepping through the crawl hole that leads onto the roof of the lighthouse. 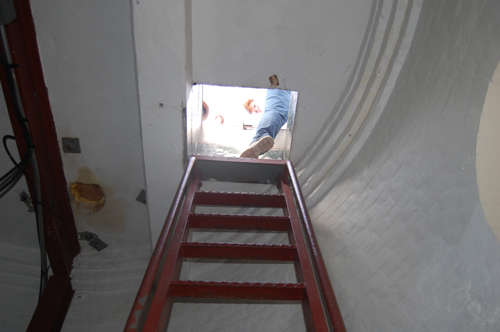 Taken from the top of the lighthouse at the crawl hole. 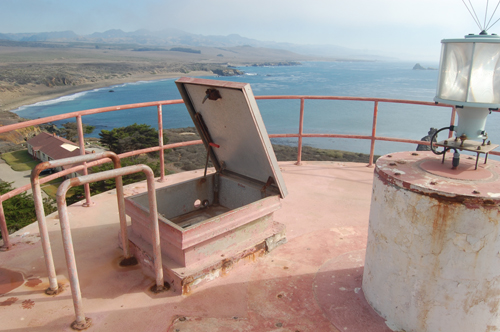 This is the light used today at the top of the lighthouse it has a flash signature of a white flash every 10 seconds. 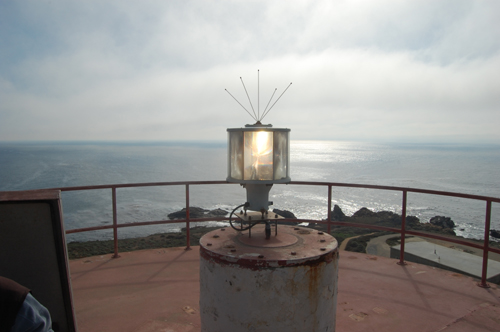 This is taking a look down from the top of the lighthouse at the fog-signal building and oil storage room.
You can also see the white rock coming up out of the ocean, this is where Piedras Blancas gets its name
in Spanish, Piedras Blancas means "White Rock". 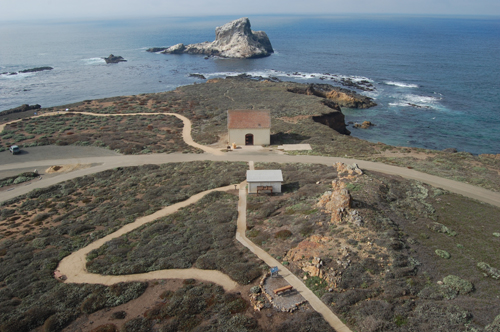 This is a view of some of the buildings from the top of the lighthouse.
The dirt road leads out to Highway One. 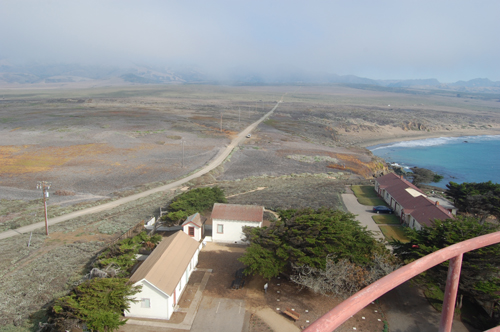 Getting ready for the long descent down the stairs inside the lighthouse. 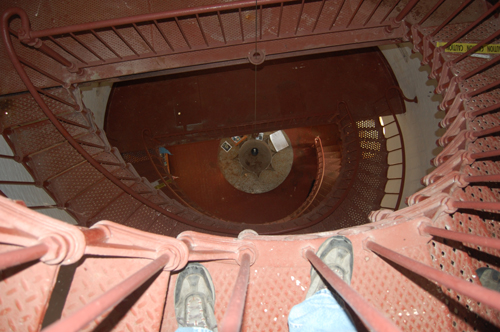 The original lens for the Lighthouse is on display just 13 miles south of Piedras Blancas Light Station
off Hwy 1 in a little town called Cambria on Main Street. 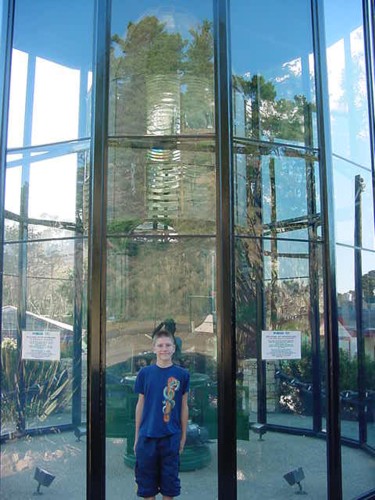 The lens is enclosed in glass so it makes it a little diffucult to see.
My son MAC is standing against the glass to give you a perspective of
just how large a first-order lnse is. The lens goes near the top of the photo. 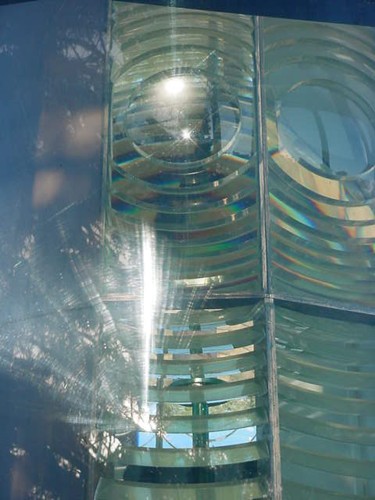 Above is a close-up of a part of the lens.

Below is the gear box that use to turn the lens. 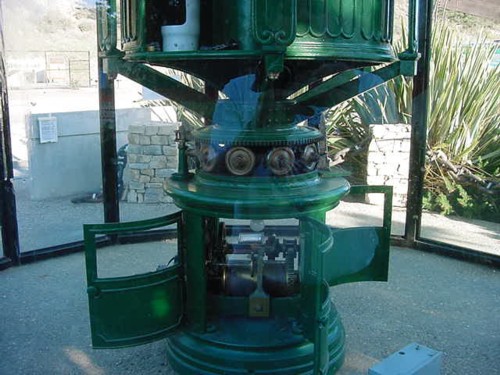